You can terminate an absent parent’s rights without involving DCYF

An absent parent will have complete rights to the child even if he/she has not seen or supported the child in years. Even if there are custody, placement and/or visitation orders in place while you are alive, they do not prevent the absent parent from taking the child after you are gone. You can’t even change that by leaving instructions in your will. But, a termination and adoption can change that.

In Rhode Island, a parent may terminate the parental rights of the other parent under very specific circumstances. In most cases, when parents cannot co-parent, one or both will seek sole custody of the child or children, but the other parent remains entitled to visitation and remains obligated to pay child support. Sometimes, that is the best that the parent with placement can do.

Usually, a Family Court investigation is conducted to determine if the adoption is appropriate and the necessary guidelines are met and the Court will generally follow the investigator’s recommendation.  If the absent parent objects to the termination, there will be a hearing to determine whether the termination is lawful and appropriate. In doing so, the Court shall follow the guidelines set out in Rhode Island General Law 15-7-7, as stated below. 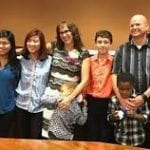 Attorney Carl P. DeLuca pioneered the grandparent termination and adoption in the early 2000’s, and the seminal case of “In Re: Abby D,” was decided in his client’s favor in 2005 after the terminated parent appealed to the Rhode Island Supreme Court. In that case, the Rhode Island Supreme Court said, “… it has no tolerance for a parent “who makes halfhearted or no attempts to visit or contact his or her child within the six-month statutory time period * * *.”

There is no way for a parent to terminate the parental rights of another parent without a coinciding adoption. The Department of Children, Youth and Families may petition for termination without adoption, but a parent cannot.

For more information regarding how you can successfully petition for a Termination and Adoption, contact us right away!

Disclaimer: Rhode Island does not certify lawyers as specialists.